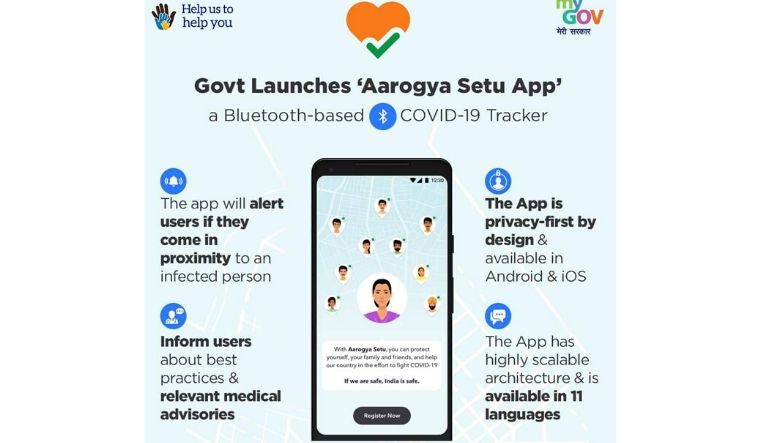 ‘Aarogya Setu’, a mobile application or app launched by the Government of India on 2 April 2020, has been termed by the Government as an important step in the fight against Covid-19 as it tracks patients and gives important updates to its users. Since its release, the Government has aggressively promoted the app on various platforms: HRD and Railways Ministry have released advisories urging students, teachers and employees along with their families to download the app. CBSE is promoting the app in its schools and educational institutions. Banks are sending promotional messages to their customers. Promotions and information are being displayed on TV channels and media. The Prime Minister along with other ministers have tweeted about it. Consequently, the app saw 1 crore downloads just after 4 days of its release, 2 crore after 8 days, and 5 crore after 13 days of release. However, how does the app work, how does it help against Covid-19, what information and data it procures from its users, how that data is used, what are its implications and loopholes in the process, are some aspects regarding which the information is not being disseminated among the masses.

How Does ‘Aarogya Setu’ Work?

The app uses a technology called ‘contact tracing’. First of all, it records the user’s name, mobile number, gender, profession, travel history, whether one smokes or not. It requires permission to access your location through GPS and Bluetooth which are kept on continuously on the phone. Through GPS, the app tracks the user’s location every 15 minutes, which means that it knows and records where you are and wherever you go. Not only that, through Bluetooth, the app can read signals coming from any other phone with this app from 6 feet away through which it will know and record who are you with and whom do you meet. All this information gets stored in the app. In case any person gets infected or develops symptoms, that information is fed to the app either voluntarily by that user or the app can get it from the government’s database of known cases since it has access to that. Now take for example that you meet a person and both of you have the app. Through Bluetooth, both phones will record the date and time of such meeting. If that person gets tested positive for Covid-19 anytime soon in the future, the app will send alerts to all the phones, including yours, who have been in contact with him, asking to practice self-quarantine or getting oneself tested. This is how the app reduces the chances of spread of infection.

Questions have been raised by cyber experts about the app’s collection of such personal information and constant real-time tracking of its users. It is evident that such an app can be quite easily used as a comprehensive surveillance mechanism by the State.

The app has been created by the Government of India through the Public-Private Partnership model, although the name of the private firm involved has not been made public. Hence, all the information that gets stored in the app’s servers will be accessed and used by the Government. The Electronics and IT Ministry has stated in its statement that the data will be used only for medical purposes. However, this is contradictory to the App’s Privacy Policy which states that the data can be used for medical as well as administrative purposes. The disclosed purpose for the Aarogya Setu app is vague enough for it to be used for purposes other than fighting against Covid-19 and it might evolve into a permanent architecture for surveillance even after the Covid-19 crisis is over.

There is no legal framework to govern the App other than its Privacy Policy and Terms of Use. It’s a matter of grave concern that India doesn’t have a data protection law in place. The Government’s Personal Data Protection Bill, 2019 presented earlier in the Parliament has met criticism from cyber and privacy experts. Even former Supreme Court Judge, Justice B. N. Srikrishna, who headed the Committee related to data protection and on the basis of the report of which the first draft of the concerned Bill was drafted, has criticized the current Bill saying that it has the ability to turn India into an “Orwellian State” as “the government can at any time access private data or government agency data on grounds of sovereignty or public order. This has dangerous implications.” In the absence of a strong data protection law, there is no remedy for the citizens against violations of their Right to Privacy, a fundamental right as declared by the Supreme Court in its 2017 judgment of K. S. Puttaswamy v Union of India, by such apps.

We have the example of ‘Aadhaar’ before us which started as a benign benefit transfer scheme but took the form of a biometric ID and mass surveillance system after numerous unrelated services was linked to it by the Government. Some cyber law experts have also pointed the absence of a guarantee that the App servers’ collected data will be deleted after the Covid-19 crisis is over. Even now, additional features are being added to Aarogya Setu. An E-Pass feature is to be released in the coming days which will act as a filter for individuals visiting public places by assigning them colours of Green, Orange and Red based on their health and contact matrix.

Without a policy of aggressive testing, ‘contact tracing’ technology cannot be successful since only timely tests will allow the people to know if there has been an infection to the people they have met. The numbers related to tests in India are abysmally low. As of 17 April 2020, among all the nations whose data is known and which have a more than 500 positive cases, India is among the 5 nations with least number of tests per population. There have been just 220 tests per 10 lakh population in India which is less than the tests even in countries like Pakistan, Ghana, and South Africa. Without a policy of widespread and aggressive testing, the Aarogya Setu app would be more useful for mass surveillance rather than the fight against Covid-19.

Use Of Technology In Times Of Crisis

In the last few centuries, the unprecedented growth of science and technology has increased the span and enriched the quality of human lives. It has led to improved healthcare facilities and invention of vaccines which have protected us from fatal diseases. However, the capitalist mode of private appropriation of profit has led to the technology which makes toiling work enjoyable, causing massive unemployment and layoffs at the same time. The enormous and profound contribution of Albert Einstein’s e=mc2 formula was tainted with its usage in invention of the atom bomb to fight imperialist wars. The aforementioned case of Aadhaar is another apt example to add to the point.

Hence, the technology of ‘contact tracing’ useful in the fight against such epidemics can easily be converted into a mass surveillance system by an authoritarian pro-capital political dispensation to crush the right to privacy of its citizens. There have been numerous safeguards recommended by cyber privacy experts like Blockchain, Artificial Intelligence, Open Source Codes, Independent Audits of Algorithms etc. which ought to be placed in the tracing system to protect privacy of individuals, but not only these recommendations have been ignored in the application of contact tracing through the app, personal information and GPS live location tracking have been attached to it, and the terms of usage and privacy policy have been made dangerously vague and all this is being done in the absence of a strong data protection law and policy of aggressive testing. These symptoms are enough to make clear the intention of the State in urging its citizens to use the Aarogya Setu app in the name of fighting against the epidemic of Covid-19, which is to clamp down on the democratic voices raised against injustice and anti-people anti-working class diktats of the State, through constantly monitoring the location, movements and even meetings of individuals.